While studying in New York City, among the other amazing possibilities that lie before you, the chance to make lifelong friends from the United States and around the world is one of the greatest. While here in the U.S., many miles away from home, these special people become not only your friends in the traditional sense, but also your family in many ways.

International students, faculty and staff greatly enhance the vitality of cultural and intellectual life at NYU & GPH, and we value the distinctive contributions of these members of our community.

There are many resources and people on campus and in the community who are here to help you adjust to life at GPH, succeed in your classes, and stay healthy and happy.

Resources for Academic and Cultural Adjustment

Adjusting to life in New York and at NYU can be a challenge. The city itself can be overwhelming, more so when you’re new. Know that you’re not alone. Students from both within and outside of the US can feel the stress of adjusting to New York. Keep these resources in mind so you can grow as you move through your transition to NYU.

When you enter a new culture, because the rules and expectations have changed, it is common to feel emotions like surprise, confusion, tension, fatigue, frustration, aggression, and embarrassment. Any of these reactions is a normal part of entering a new culture or a new life environment.

➪ The U Curve

The U Curve is a cultural adjustment model that was first introduced by sociologist Sverre Lysgaard in 1955, but it has been further developed by other scholars during the following decades. This is a visual representation of what can happen when a person starts to live in another culture, encountering a new or unfamiliar way of life or set of attitudes - sometimes known as culture shock, culture stress, or culture transition. There can be a range of emotions in this process, including confusion, frustration, anxiety, fatigue, and disorientation. The U Curve offers a somewhat simplified illustration of things, but can help us get a clearer understanding of what’s happening during this transition. 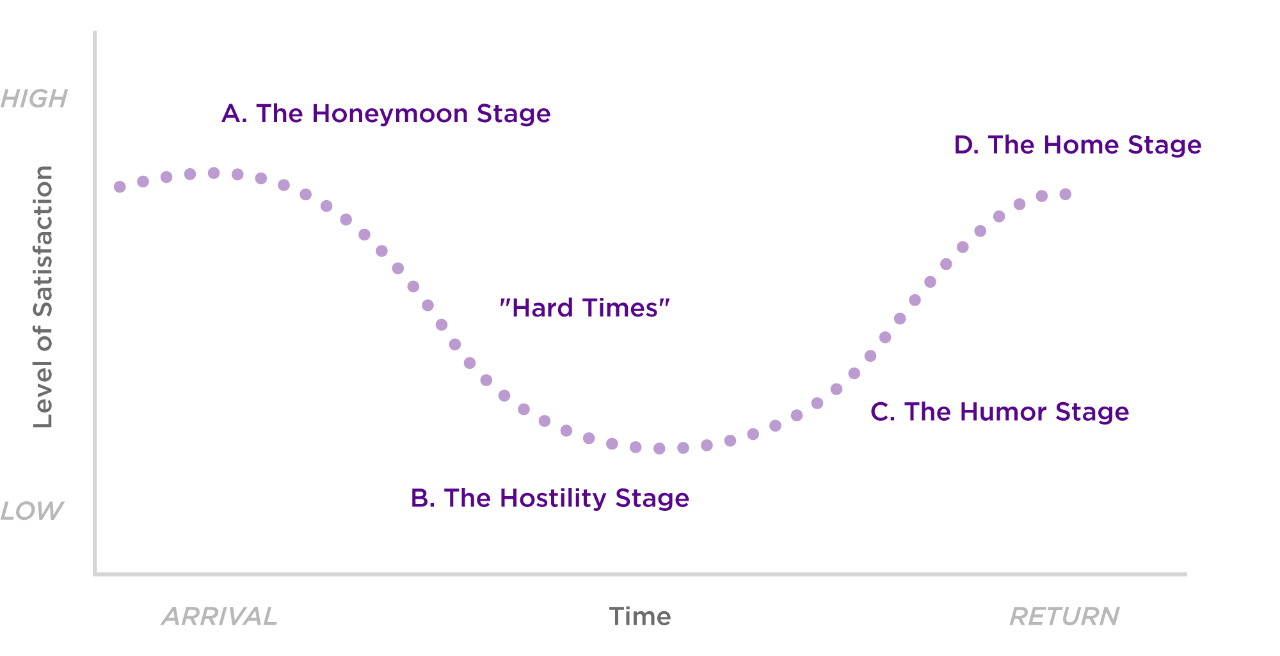 ➪ Honeymoon | During the honeymoon, you may feel excited, stimulated, and curious. Differences feel interesting, energizing, and appealing. You are entering into something you have hoped, worked, and planned for, and you are full of positive emotions as you do so!

➪ “Hard Times” | Sooner or later, you will enter the downhill slope of “Hard Times.” It comes when cultural differences cause feelings such as frustration, misunderstanding, confusion, tension, embarrassment, inadequacy, and isolation. This is a crucial, inevitable transition – but it often can come as a surprise. It can happen a few months after arrival -- or much sooner than that, even within the first few days or hours! But eventually, it will happen. Don’t worry, though; it is a normal part of adjusting to life in your new environment.

➪ Hostility | Hostility is a time of transition; it is also called Fight or Flight. For some people, hostility is turned outward as they become negative and critical of those around them in the new environment. For others, hostility is turned inward as they become depressed, anxious, regretful or hopeless in the new environment. In either case, your attitude and reaction during this stage can make all the difference, leading you in one of two ways:

A. You can grow as you move through Culture Shock/Transition by observing, listening, initiating and asking questions. Key to this is an attitude of openness, acceptance, trust and adaptability. This will lead you to growth, accepting differences and eventually feeling more at home in the new culture.

B. You can get stuck at the bottom and spiral even further downward as you criticize people and things, rationalize your negativity, blame others, and isolate yourself. Choosing these negative reactions will lead you to personal and academic problems as you reject the new culture and feel frustrated, alienated, and hostile towards it.

The stages outlined above often are not linear, but can become a cycle, with Home becoming a second Honeymoon stage and new stresses leading you to new Hard Times.

New “Hard Time” stresses can happen from new circumstances or surprises like:

These can all present new settings for misunderstanding, but also new opportunities to learn and grow. Your attitude and reactions make the difference!

☛ Develop awareness of your own cultural values and assumptions | When you’re in a new place it’s not always easy to understand everything that’s going on around you. To help you build an awareness of your own values and assumptions in situations where you feel confused or frustrated, ask yourself why you’re feeling the way you do. How may your expectations be different from what you’ve experienced?

☛ Avoid making assumptions about people based on appearance or linguistic ability | Be open and accepting of the unexpected in each person you meet.

☛ Be mindful of cultural differences, but be wary of stereotypes | Within every culture or society, there are tendencies and patterns of values and behaviors. However, people are all unique combinations of these various elements and trends. Any person you meet might think, react, or behave differently from your expectation of what is “typical” for that culture. Be aware of the likely areas of difference; but be mindful of each person’s uniqueness, too!

☛ Maintain a sense of humor | Be ready and willing to laugh at yourself or with others as you navigate intercultural learning and growth.

☛ Be patient with yourself and others as we all learn and grow together | Maintaining a hopeful, positive attitude can make all the difference!

☛ Use resources to help you manage your adjustment and communication | Check out the list below.

Professors and classmates talk about their experiences inside and outside of the classroom to help you prepare for your new community.

Once you log into NYUHome, take a look at the “NYU Life” tab. Click on GoWorldWise to access tools on cultural competency and getting best practices for communicating, living, or working in another country or city, including New York.

While getting to know the people in your program, department, or school is always a great start, make sure to review this section that will give you some additional resources where this can be achieved.

The GPH International Students Society (GISS) is a student organization that represents the GPH international student body. GISS focuses on helping international students to be part of the GPH global community and supports their transition into campus life and adjustment to the American culture, enabling them to build professional relationships, and share the cultural richness of public health experiences.

GISS aims to cultivate a diverse, inclusive, and dynamic community for students from every corner of the world, providing a forum through which members can come together to celebrate differences and achievements alike, share experiences and stories,  raise concerns, and most importantly, build a strong community of future public health advocates. GPH ISS is a place where we grow and help others grow with us.

GISS hosts social and cultural events, academic lectures, and professional and networking events, to celebrate the diversity of GPH’s student body, and also give international students the unique experience of living and studying in New York City.

Several Faculty at the NYU School of Global Public Health has a diverse academic environment with faculty coming from every part of the world, representing important research and teaching components of the University. So, never be afraid to raise your hand or ask for clarification when you don’t quite understand something!

Additionally, they all have office hours, which is the time and place to ask more personal questions concerning lectures. GPH Faculty are always eager to discuss any questions or concerns you have on a lecture.

In this video GPH International Faculty Topics discuss academic culture at NYU & GPH, adapting to life in the US, overcoming language/writing issues, and carving a social life for yourself while enrolled in a full-time academic program. They share their tricks and tips, resources, and stories of challenge & success.

The NYU International Student Center (ISC)  is a hub for events and programs that foster meaningful connections among all global thinkers and help students from around the world make the most of their NYU experience.

Visit the International Student Center in Kimmel Center 704 to study, relax, and socialize. There are couches, tables, screen, and a large whiteboard for you to use. Make sure to mark on the map where you call home!

The International Student Council (ISC) is dedicated to providing a holistic experience to undergraduate and graduate international students. ISC creates community and promotes diversity amongst the international student body across the University through the organizing of events and other initiatives. Check out ISC events on their Facebook Page.

RISE provides opportunities for peer interaction, assists with integration into the US, and helps students stay connected to their own culture while connecting with the greater NYU and NYC community.

NYU's International Houses promote the study of diversity issues worldwide and encourage discussion and dialogue at NYU and the surrounding community.

Religious and Spiritual Life at NYU

Religious and spiritual life are valuable components of day to day existence for many international students, including those who just want to explore and learn. NYU offers access to a wide range of faith-communities, chaplains, and student-run clubs. Learn more about Religious and Spiritual Life and visit the Spiritual Life section on our Current Students website.

The Center for Multicultural Education and Programs (CMEP) offers a vast array of educational and social events, programs, and resources that aim to engage, support, empower, and celebrate students of color and those of marginalized and underrepresented backgrounds—throughout NYU’s global network and around the world. Learn more about CMEP.

For Writing Resources at NYU GPH visit the Writing Section on our Current Student page.

For Writing Resources at NYU GPH visit the Health & Wellness Section on our Current Student page.