Two men sit outside of wide wooden gates. One dependably holds an old radio inches from his ear, wearing a taqiyah and weathered Hawaiian shirts everyday (see photo below). Only on Fridays, for mosque, does he dress in an impeccably white tunic. These two men are the drivers for the Indian contractor and his Lebanese wife who live across the street from our apartments. I have never seen either of the couple, so their high, flower-laden, and white-washed walls enclose great intrigue for me. She is said to own the rare flower store in the building next to theirs, which sells precious cacti for more than I can afford, and lends itself to further their mystique. Greeting these two men is the apex of my morning, each morning, returning from my yoga practice at our gym down the road. We each exchange a smile, occasionally an observance of the weather, or a joke. Mostly though, it is a subtle, kind, acknowledgment of our familiarity with one another that I relish. 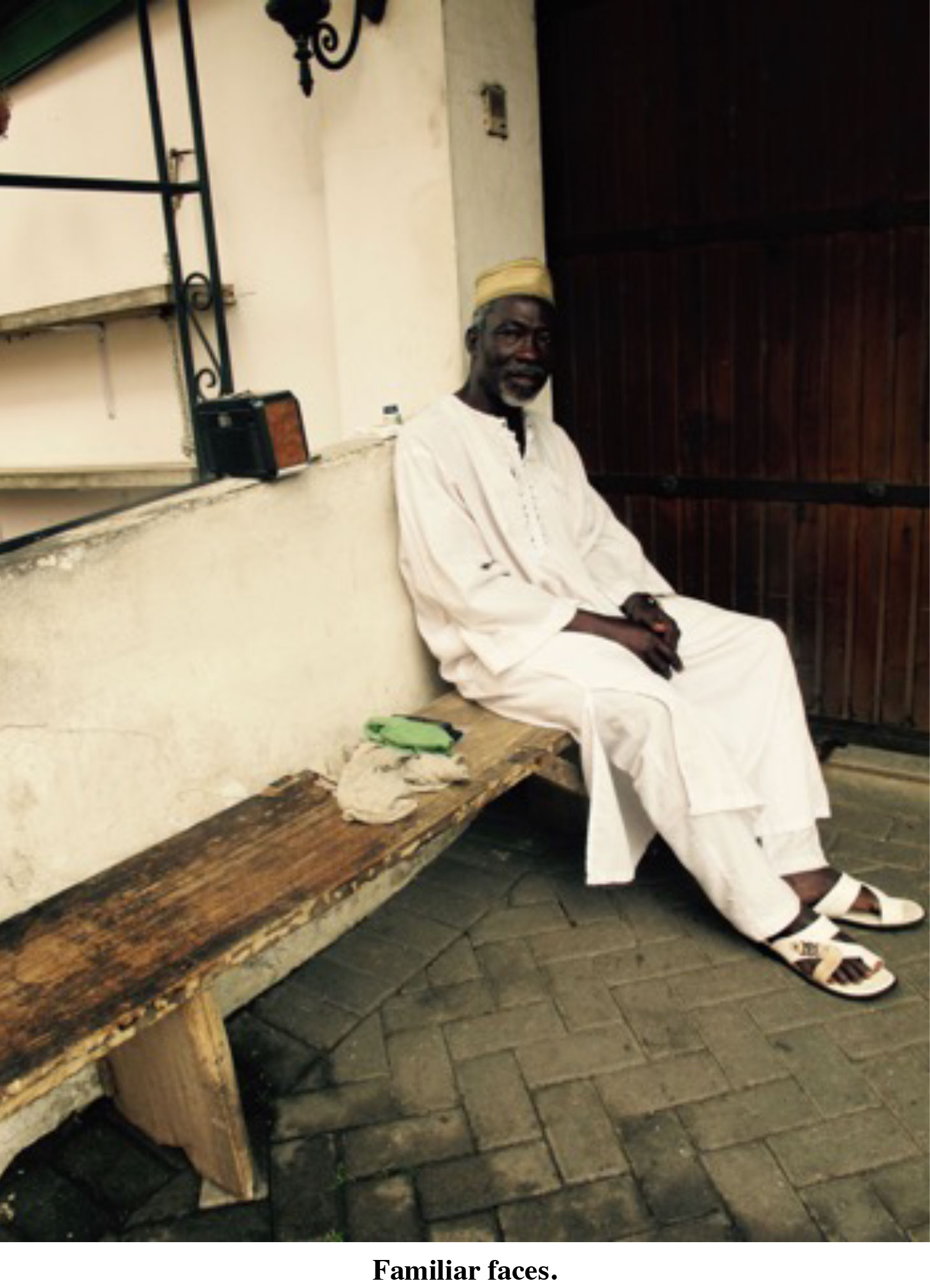 Having been in Accra for almost two months now, and entering our seventh week of classes at the University of Ghana, such familiar faces and daily patterns are becoming imprinted in my mind and body. However, in Ghana, each day is inevitably unique, with new places or another marriage proposal to catch you off-guard. Just last night in fact, I had such a proposal from my motorcycle-taxi driver, Francis. I was returning from meeting some German and Lithuanian friends at the local Abajo Arts Cafe to listen to traditional drumming, when Francis offered to marry me after I paid my 10 cedes for the lift home. His proposition included that I “could forever have a motorcycle-taxi back in Europe where I’m from”. I gently declined this offer, but thanked him, which he humbly accepted and drove away with a smile.

The area surrounding Accra is also full of wonders. The other day I visited the Botanical Gardens in Aburi with the same European volunteer friends, and spent an hour on the best guided tour I’ve ever had. Our guide, Emmanuel, was from the North of Ghana, having come to the South in search of work like so many others. He told me that he’d studied agriculture and loved taxonomy in high school, which showed through his enthusiasm for each plant he introduced us to. I also concentrated in botany in my undergraduate degree, so I particularly appreciated this. The gardens were founded in the Mid-19th Century by the British as a public garden to which they grew not only fantastic native species, but introduced varieties including nutmeg and cinnamon trees. The nutmeg tree was perhaps my favorite part of the tour, as we witnessed a nut drop from the husk which opens while still in the tree when it is ripe. The nut then falls to the ground, wound in a red so bright and shiny it appears synthetic (see photo!). 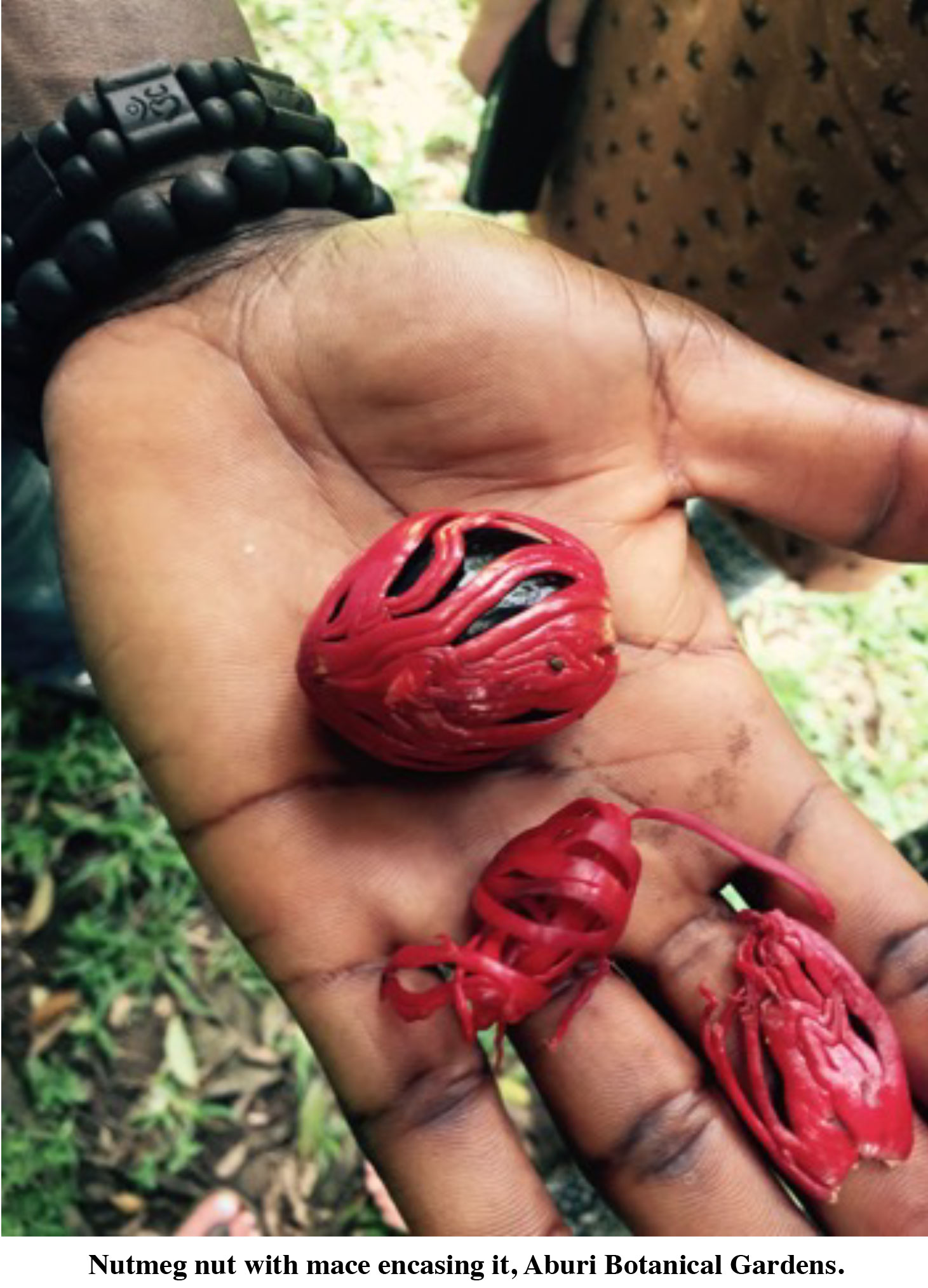 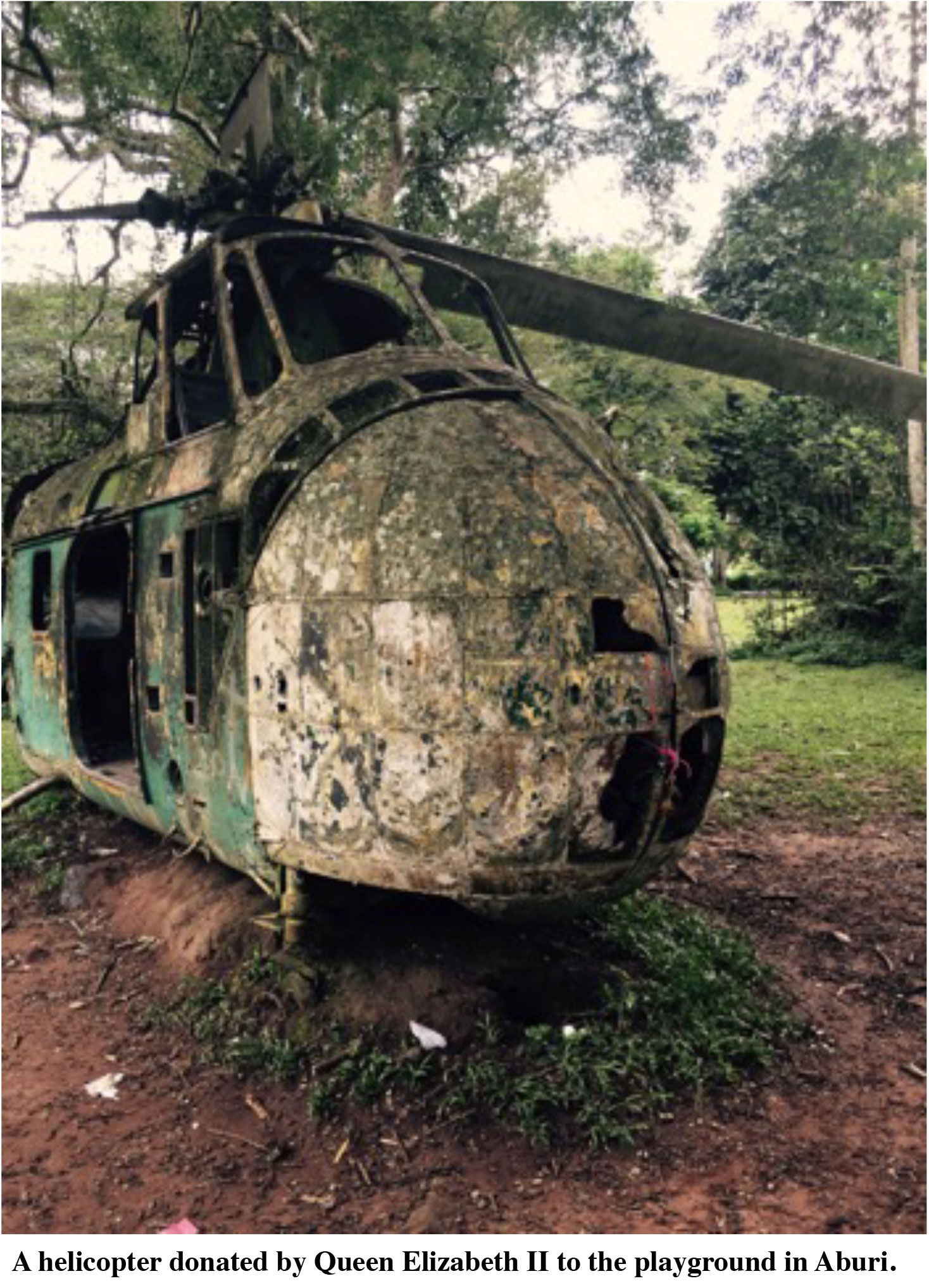 This incasing is the substances used in mace, or pepper spray, when dry. Within this is then the nut which can be broken open to harvest and dry the nutmeg seed within. Almost as fascinating was the ficus tree, which you can see myself and Emmanual climbing in the photo below. Essentially, Amangyedua is a parasitic tree that overtakes the original trees on which they grown. When the tree within them dies, a fantastic hollow trunk remains. My hope is to bring school children from the Urban Poor Children’s Organization (UPCO- where I’ve recently started to volunteer, building their school garden) to these Aburi gardens to share in how magnificent nature is here in Ghana. 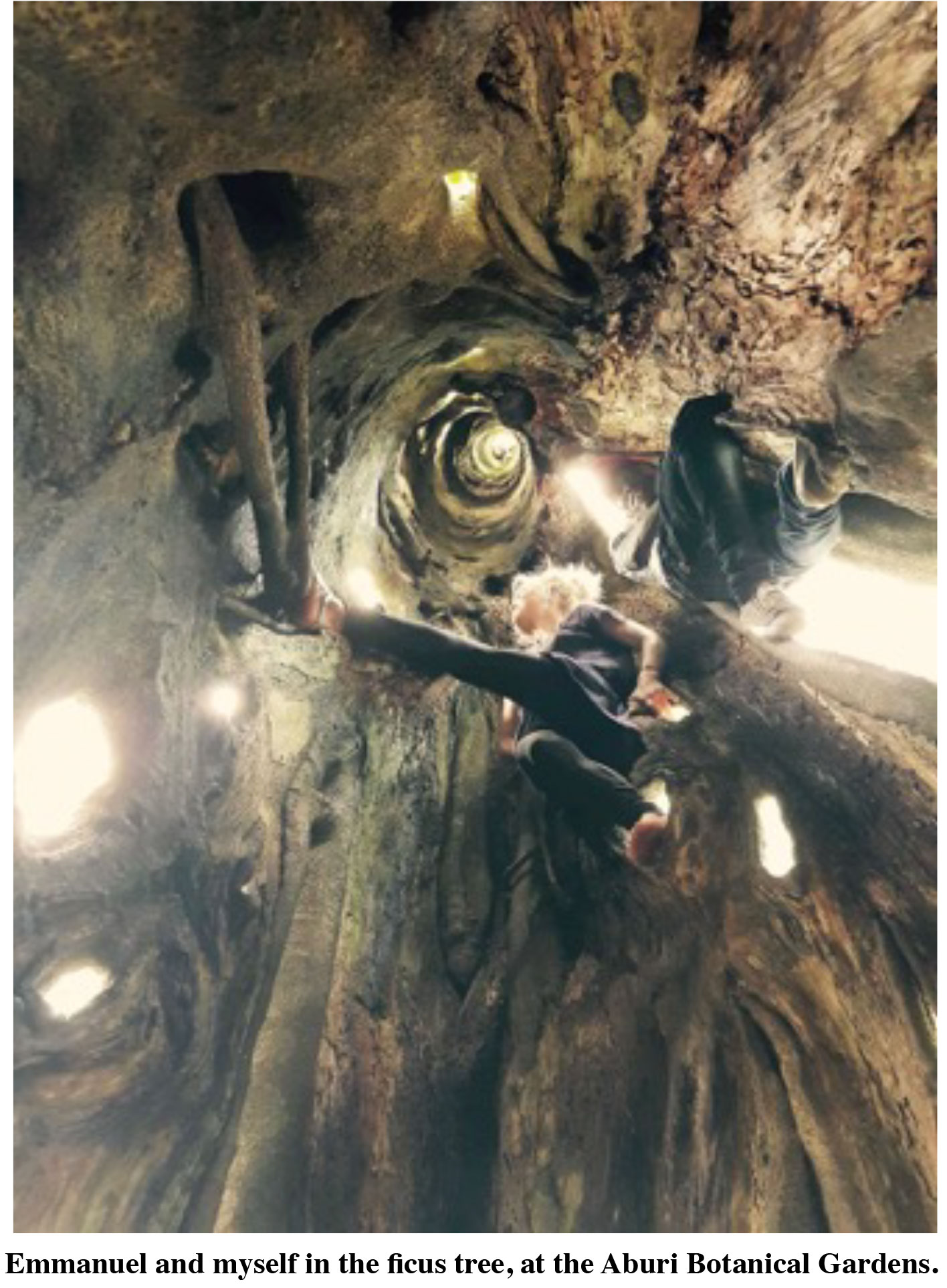 On Wednesday of this week the class joined one of our coordinators, Elizabeth, on a trip outside of Accra to the community of Dodowa, a new experience in itself to see the daily operations of a rural community health center. In essence, their mission at the Dodowa Health Center is to collect census data from communities across Ghana by talking to local residents. Each house in the communities they work in is numbered with blue spray paint somewhere on an outside wall, the coordinates of which are recorded in a GPS unit. Usually the matriarch is interviewed about how many people are living in the house, how many are pregnant, died, have moved away, or recently joined them. The contrast between this and how we estimate the population and household size in the U.S. is fascinatingly stark. As public health professionals, it’s necessary to learn and understand that people around the world often face the same problems, however the best way to come to a resolution can differ greatly. Our advanced electronic medical records, birth certificates, and autopsy documentation are impeccably accurate, but in areas like Greater Accra, a different system must be developed to address the same needs. 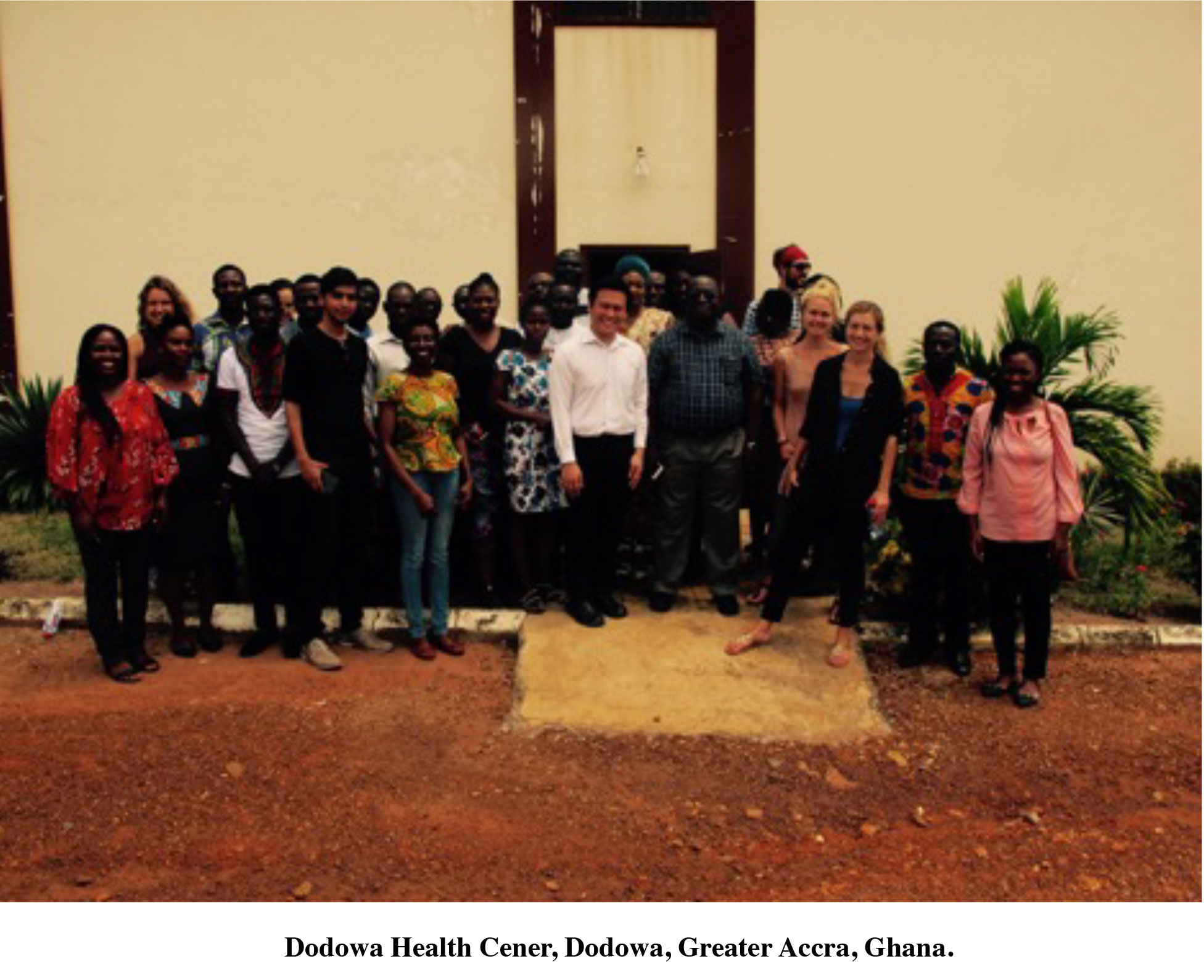 Finally, this week also marked the fifth birthday of Fabiana’s son Dani (see photo). Azam Ahmed (New York-NYU Alumni-cat-enthusiast-reserved but quick witted) and Ashlyn took the initiative to purchase him a gift and helped carry catering from the Ghanaian restaurant we usually eat at on Friday nights, Buka, in a taxi to Fabiana’s home. Her jubilant Italian mother greeted everyone at the door with hugs and much gesticulation, as she does not speak English and only myself, Kyoko, and Brooke have just begun to learn Italian (for our Spring Term in Italy!). 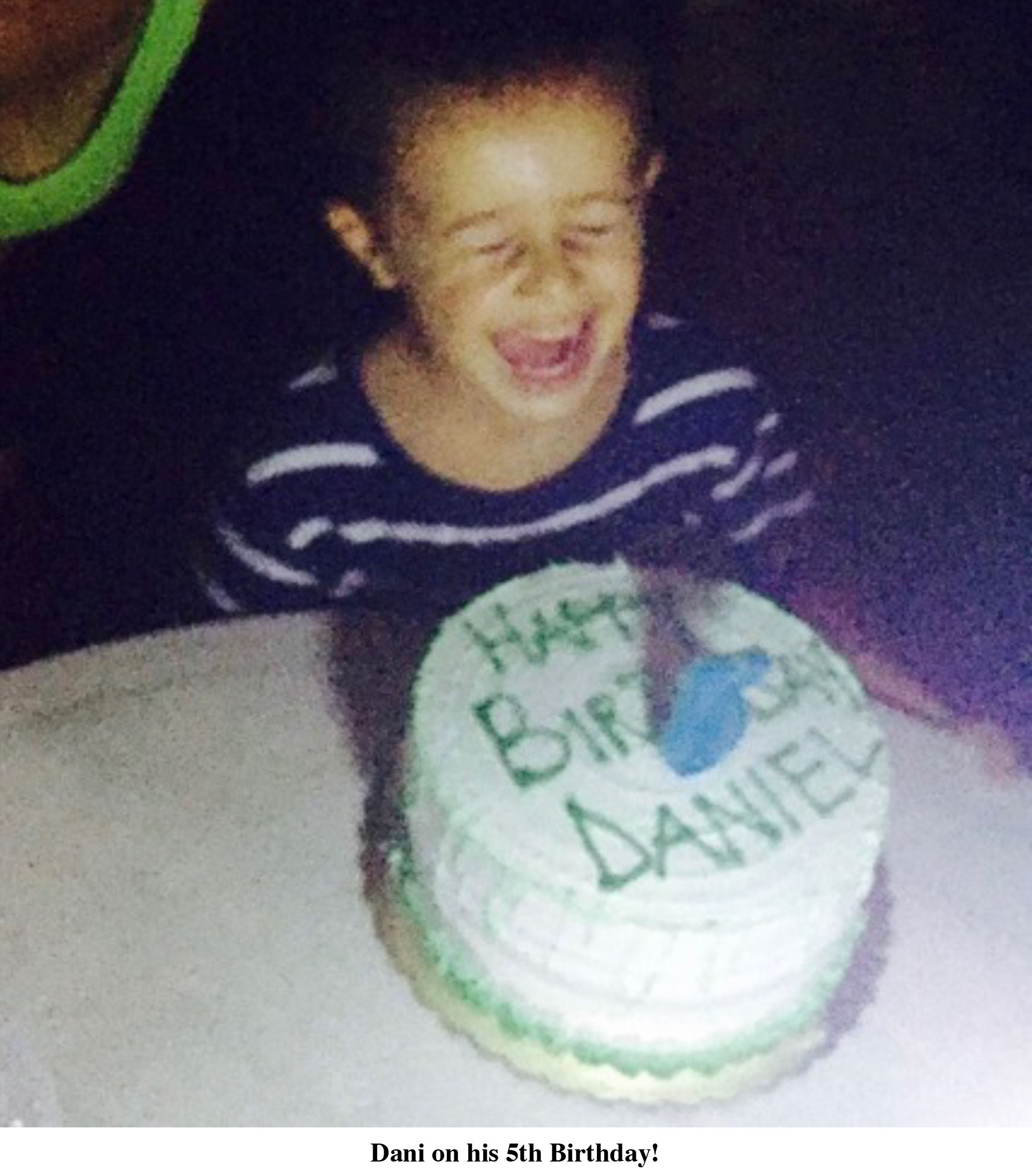 Next semester and even our exams for the end of this one seem far away for now though, which is a relief. Joel’s burgeoning research on non-communicable diseases is taking off, today Sabine is going to the wedding of a coworker from Marie Stopes International, and next week our coordinator Sharon Robert and Dr. Bernadette Boden-Albala (the Senior Associate Dean of Research and Program Development at NYU) will be joining all of us. Therein, much is to be done.