The primary cause of climate change (the greenhouse gas effect) is directly related to what humans put into the air. Greenhouse gases often come from sources that also contribute to air pollution (industrial waste, vehicle exhaust, etc.). According to the CDC, the higher air temperatures brought about by climate change increase the number of allergens in the air, which can contribute to longer allergy seasons and can put people at higher risk for acute respiratory episodes and hospitalizations1. Increased ambient air temperature also increases the amount of ground-level ozone, which is a key component of smog. Ozone is a harmful air pollutant which is known to cause diminished lung function, increased hospital admissions and emergency department visits for asthma and increases in premature deaths.

Particulate matter, or PM, is the term for a mixture of solid particles and liquid droplets found in the air. These particles come in many sizes and shapes and can be made up of hundreds of different chemicals. PM may come from construction sites, unpaved roads, fields, smokestacks or fires. Most particles form in the atmosphere as a result of complex reactions, of chemicals such as sulfur dioxide and nitrogen oxides, which are pollutants emitted from power plants, industries and automobiles. Particulate matter contains solid particles suspended in liquid droplets that are so small that they can be inhaled and cause serious health problems. Some particles less than 10 micrometers in diameter can get deep into lungs and some may even get absorbed into the bloodstream. Of these, particles less than 2.5 micrometers in diameter, also known as fine particles or PM2.5, pose the greatest risk to health. PM2.5 are primarily produced through combustion, so fireplaces, car engines, and coal- or natural gas-fired power plants are all major PM2.5 sources2. Changes observed in people exposed to PM2.5 include increased airway inflammation and sensitivity, decreased lung function, changes in heart rhythm and blood flow, increased blood pressure, increases in the tendency to form blood clots, and biological markers of inflammation3. These health effects cause increases in symptoms, emergency department visits, hospital admissions and deaths from heart and lung diseases4.

Among adults in New York City, an estimated annual 3,600 emergency department visits for asthma are attributable to PM2.5. These rates vary considerably, from as low as 9 per 100,000 population in Southern Staten Island and Southwest Brooklyn, to as high as 100 to 200 visits per 100,000 in Northern Manhattan, large areas of the Bronx, Central Brooklyn, parts of Eastern Queens, the Rockaways and parts of Northern Staten Island. Disparities by neighborhood poverty are large; there is a 5-fold increase in high poverty, compared to low poverty, neighborhoods. Across city neighborhoods, the rate of respiratory hospitalization among adults attributable to PM2.5 per 100,000 persons varies more than 7-fold, with the highest burdens found in sections of the South Bronx, Northern Manhattan and Northern Brooklyn5.

This air pollution is not equally distributed among neighborhoods, unfortunately. Due to racist historical practices like redlining, a policy in which banks would not provide loans and financial capital to any resident living in majority black neighborhoods, areas with a majority population of black and indigenous people of color often have higher rates of PM2.5 air pollution and health disparities in every category (respiratory, cardiovascular, accidents/ injuries, etc.). Take for example, the Hunts Point neighborhood in the South Bronx. A recent study from the NYC Environmental Justice Alliance and THE POINT Community Development Center showed the Hunts Point has much higher levels of PM2.5 air pollution than most other neighborhoods of New York City6. 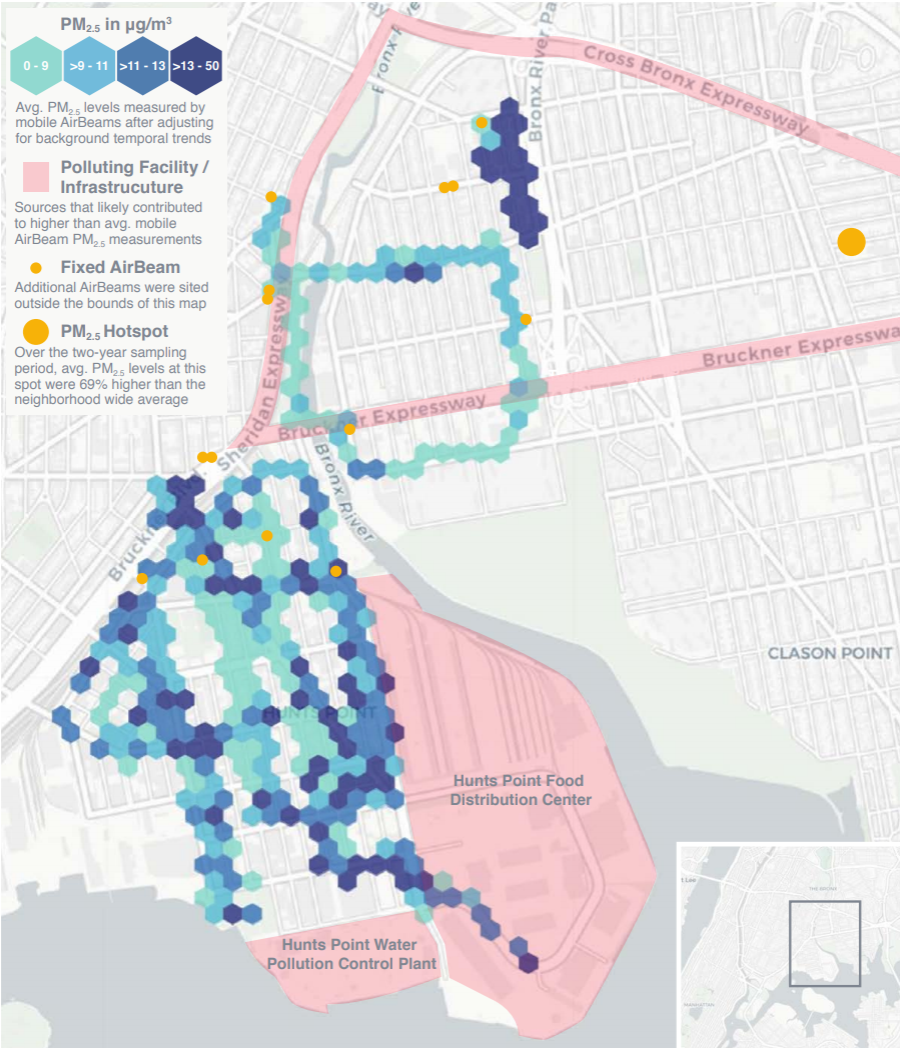 Cities and states can start to tackle the issue of air quality in the face of climate change by implementing air quality standards and clean air policies that prioritize environmental justice neighborhoods like Hunts Point. Additionally, investing in electric forms of public transportation and bicycle infrastructure can reduce the amount of vehicles on the road and the amount of exhaust emissions which is a major cause of respiratory illness in the South Bronx due to the Bruckner, Sheraton, and Cross Bronx Expressways.